EVENTS
HIDE
SHOW
After a satisfying day of trekking in the dazzling mountains just south of Almaty (See Part 2), my friends and I were slumbering soundly in our Spartan accommodations at the Almaty Rose Chalet, the small room warmed by a glowing space heater in the corner. Our sleep was violently interrupted

After a satisfying day of trekking in the dazzling mountains just south of Almaty (See Part 2), my friends and I were slumbering soundly in our Spartan accommodations at the Almaty Rose Chalet, the small room warmed by a glowing space heater in the corner. Our sleep was violently interrupted in the dead of night, however, when the door flew open and a towering, muscular shadow burst through the threshold, verbally assaulting us with a rapid-fire stream of questions in Kazakh. Sensing our confusion, the shadow finally shouted “Do you speak English?!” and, perplexingly, “Where is your trainer?!” Were this to happen in the United States I would have been completely terrified, but here in the mountains of Kazakhstan the situation seemed more of an annoyance than a threat. Sure enough the slurring shadow soon retreated, profusely apologizing for the disturbance as he went. Looking back, it seems that this minor home invasion was an omen of what the next two days would have in store for us: a series of missteps and mishaps that, while unpleasant in the moment, would nevertheless come to constitute some of the most remarkable moments of the trip. 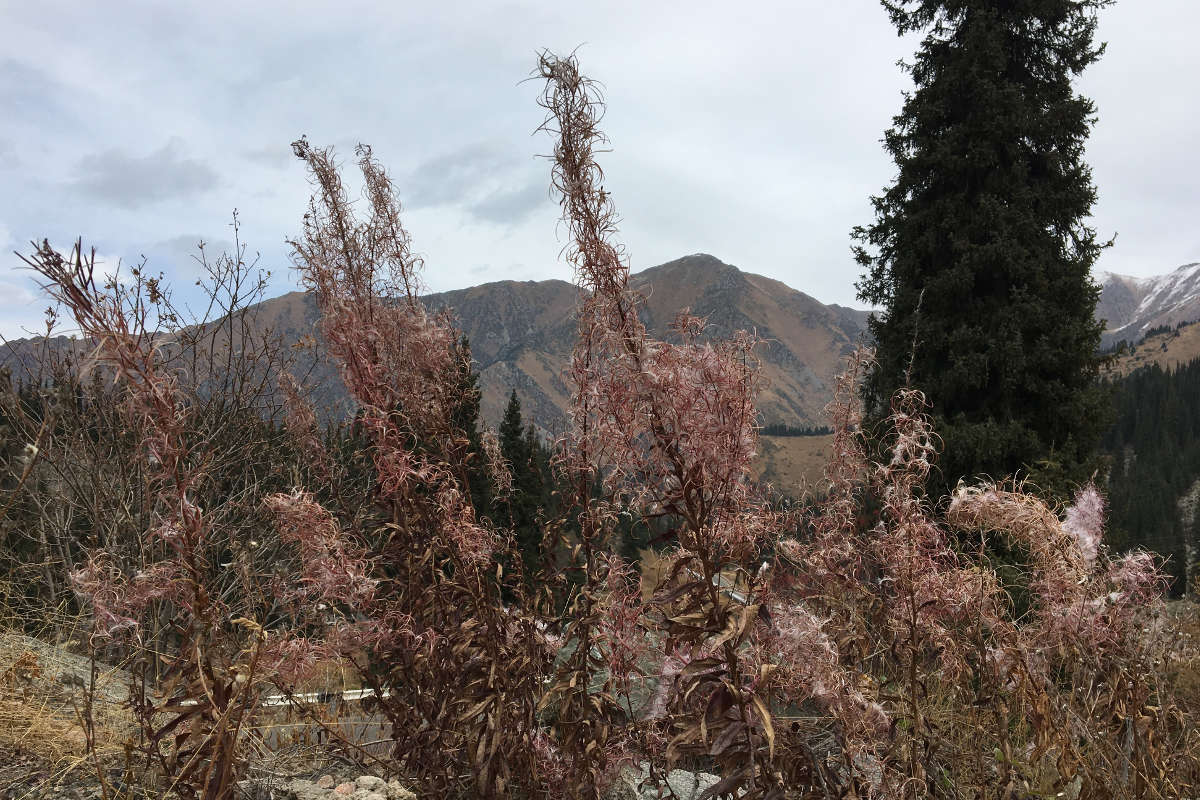 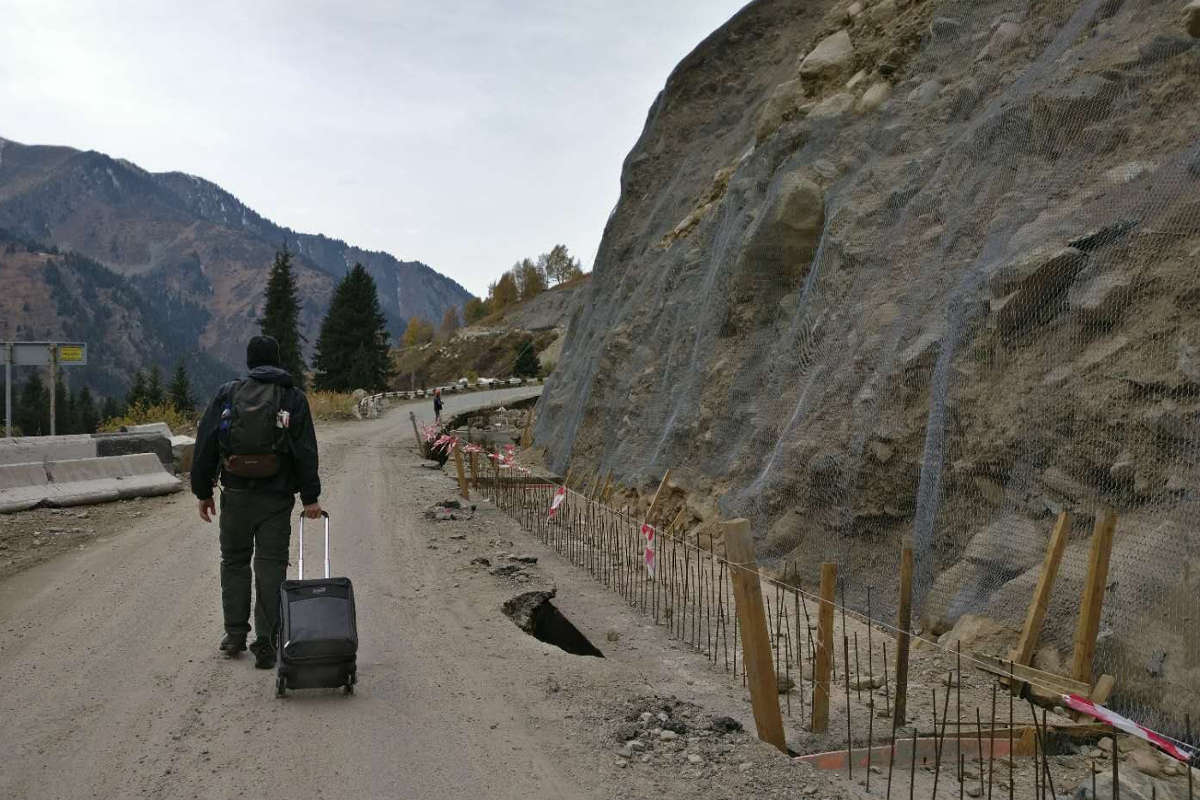 Despite the late night apparition, we awoke the next day with high hopes for the adventures that lie ahead. In our guidebook, we had read of an intriguing astronomical observatory situated high in the mountains above Lake Almaty where we might just be lucky enough to get a tour from one of the visiting scientists. Beyond the observatory, we would ascend another 6km to Kosmostantsia, where we could explore a collection of ruined Soviet research before continuing on to the summit at Zhusalykezen Pass, where the views at 3336 meters should have been nothing short of majestic. After a rib-sticking breakfast of rich porridge, we began our ascent up the road towards the observatory.

Just over an hour later, we reached the lake, where we intended to stop briefly for a rest. Just then, however, we were approached by a team of young, burly soldiers, who brusquely interrogated us about our agenda and demanded to see our passports. While Lisa and I had ours, Mark had left his back at the hotel out of concern that it could be lost or damaged. The soldiers exchanged meaningful glances before informing us that it was against the law for a foreigner to be hiking in this border region without proper documentation. Annoyed by the realization that we’d have to spend the next two hours backtracking, we begrudgingly offered to return to the hotel to fetch the passport. Our new friends had other ideas, however; Mark had broken the law and the situation would have to be rectified. The soldier in charge told him to get into their jeep so that they could whisk him away towards the Kyrgyz border, beyond the last checkpoint, in order to properly resolve the situation. Suddenly panicked by the prospect of having to Mark’s family that we lost him somewhere in the Tian Shan Mountains, we fervently protested until they agreed that all three of us could pile into the jeep together.

Packed in with all four heavily armed soldiers, we ascended the steep mountain pass, the young soldiers putting us somewhat at ease by expressing their great admiration for mixed martial arts fighters from Canada, the home country of my friends. We turned off the main road upon reaching a compound that featured- to our surprise- the old observatory, now converted into a military base. At the entrance to the compound were four scarecrows festooned in WWII-era gas masks, ominously arranged for shooting practice. Despite the foreboding décor out front, the world inside of the office turned out to be rather mundane: shabby wooden furniture, old computers, and people drinking tea to stay warm. We were led to a small office, and as soon as we sat down it became clear that we wouldn’t be extricating ourselves before parting with a little cash. Our blood boiled Feeling trapped and cheated, , but we agreed it would be best to cut our losses and play along with the charade; we didn’t know the laws of the land, after all, and from past experience I knew that one disgruntled person in a position of minor authority can make your life hell if they feel inclined. Fortunately, the amount in question turned out to be around 20 dollars, and we reluctantly agreed to the soldiers’ demands to wire them the money from a Kazakpost before leaving town. Mark was now “in the system,” they warned us, and failure to email these soldiers photographic evidence of the receipt would mean that Mark would not be joining us on our return flight to Beijing.

Finally, the soldier dropped us off back where they had originally found us. Unfortunately, there would be no more ascending beyond that point, so we stopped for one last look at the magnificent Almaty Lake from atop a nearby lookout. From there, for the first time, we could clearly see the enormous glacier in the mountains to our West, its form almost beautiful enough to make up for the last couple of hours. Although our itinerary had been entirely blow up by min-morning, we figured we could still take advantage of the picture-perfect alpine scenery by walking the three hours back down the winding long, winding road towards Almaty. I must have cut a strange figure to passersby, wheeling my sleek grey carry-on-bag along the uneven asphalt. My friends also had heavy backpacks to haul, but we were invigorated by the rich oranges, reds, pinks and yellows in the wildflowers all around us. Green swaths on the mountains were punctuated with fiery explosions of blood red foliage. While Beijing was experiencing an Indian summer, autumn had already arrived in Kazakhstan full force, leaving us with the impression of having time travelled. 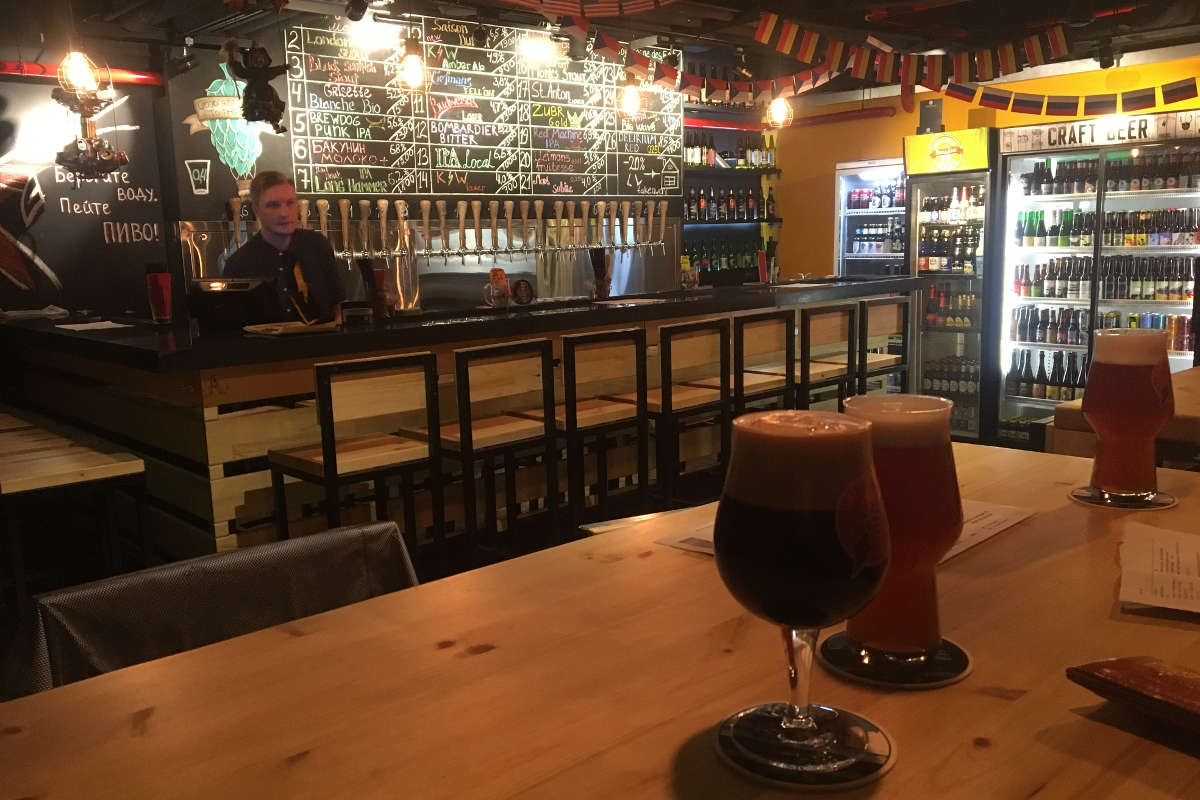 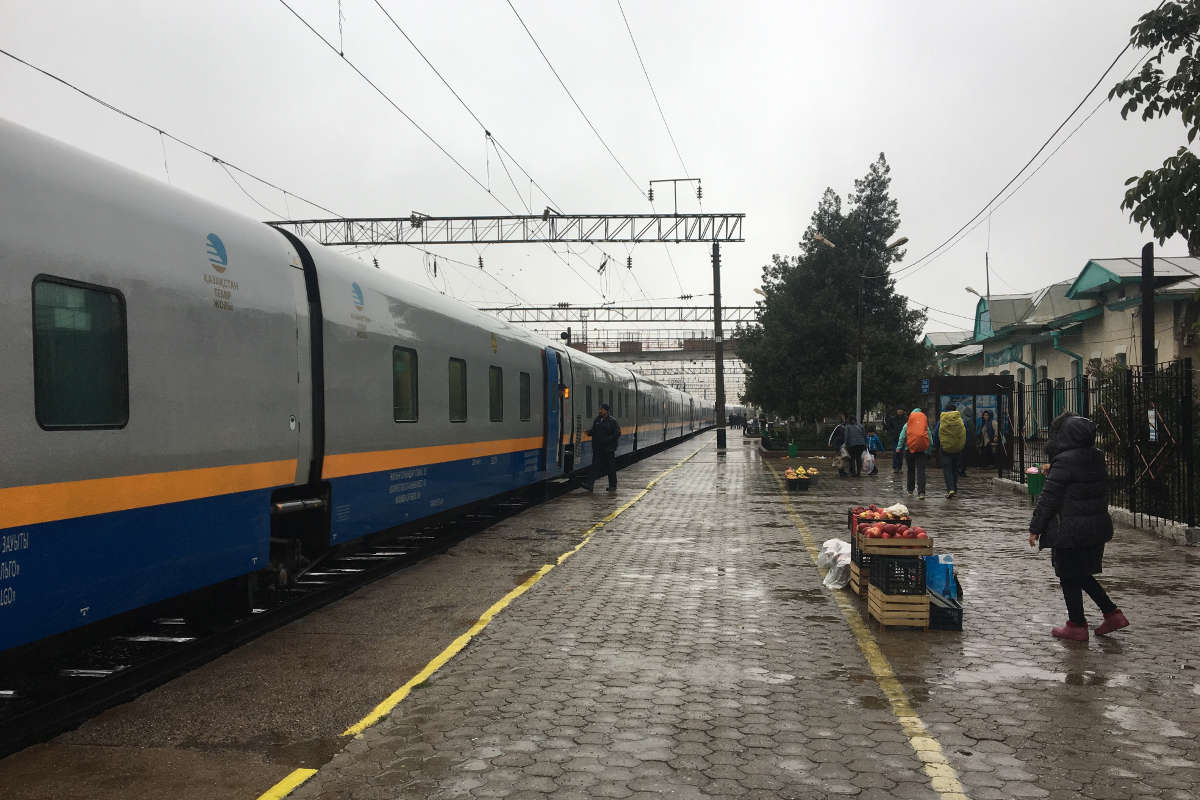 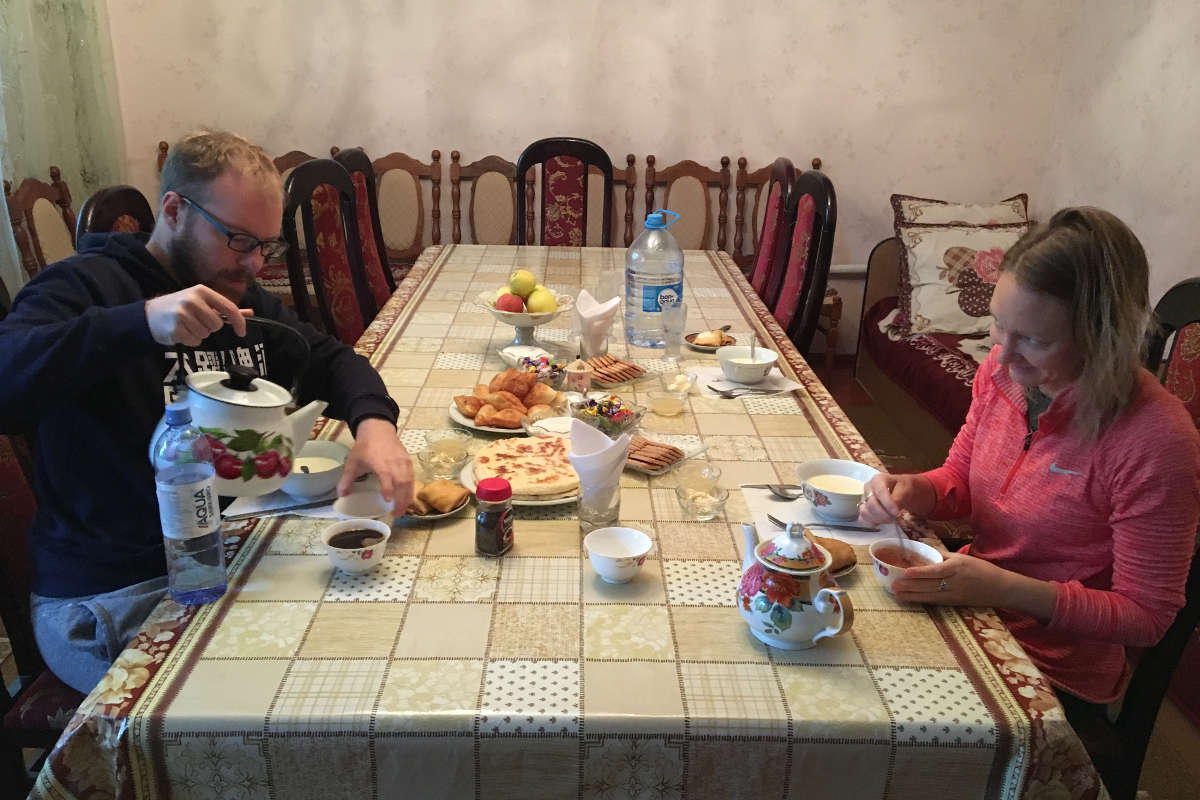 We finally made it back to town in the late afternoon and immediately went in search of the Kazakpost so Mark could pay his debt to society. This would prove easier said than done, as we first had to navigate a labyrinth of non-English speaking attendants, confusion about how to make the transfer, and even a stern lecture about Mark’s misdeeds. After a couple of trying hours in what looked (and felt) an awful lot like a DMV, we were finally rescued when English-speaker bystander with a heart of gold intervened on our behalf. To celebrate, we made a b-line for Kraftwerk, an inviting underground bar we had spotted earlier with a formidable lineup of craft beers from Eastern Europe and beyond. Mark took the edge off with a few potent Red Machine IPAs from Russia, while Lisa and I indulged in some raspberry porters, one of the most unique brews I’ve ever tasted.

Around 10, we made our way to the train station for our overnight trip to Zhagably, a small village in Southern Kazakhstan where more outdoor adventures awaited. For me, sleeping on trains has always been a special experience. It may be the rhythmic pounding of the wheels on the tracks, the child-like camaraderie of sharing bunk beds, or the simple pleasure of cracking open a package of linens, freshly washed just for you. The trains worked their magic that evening as well, and before we knew it, the hundreds of miles separating Almaty and Zhagably had vanished. We awoke before dawn, barely able to make out the monotonous landscape of farmland from the windows in the pre-dawn light, and when the sun finally did rise we could see that it would be a bleak, rainy day. Bleary eyed, we hopped off the train at the closest stop to Zhagably and were quickly spotted by our driver, a thin, handsome man who was nearly the same age as me but looked to be about 15 years my senior. Our chariot was a mid-80s model Lada, solid as a rock and reminiscent of the prehistoric VW Beatles still prevalent in Central America today: they won’t not win you any drag races or beauty contests, but they die hard. Despite the rain, the driver accelerated through the straights and whipped us around corners with the confidence that could only belong to someone who had driven the same exact route in the same exact vehicle thousands of times. The scenery outside was shrouded in a heavy, grey mist, the kind that makes you want to stay under the covers as long as possible.

When we arrived at the guesthouse, the rich smell of home cooking enveloped us. We were immediately greeted by a radiant smile from the driver’s wife, who ushered us into the dining room where a regal feast of baursaki (delicious morsels of fried bread), eggs, blini (pancakes filled with sweet cream), fresh fruit, coffee, tea and sweets awaited. Suddenly, a day spent reading and playing cards seemed a lot more tantalizing that a frozen hike in the sleeting rain. Eventually we would opt for the later, thus leading to our second memorable mishap in two days, but for now we leaned back in our chairs, savoring the feeling of a full stomach in a warm room on a rainy day in the home of welcoming strangers.